It was Christmas day, 1992. That morning I started hitchhiking to Bosnia. Or so I thought.

I was living in Muenster, Germany with my girlfriend Christiane. She was an assistant at a dermatologists office and was kind enough to find me a job. My job was to stand solo in a basement to fill small plastic pots, tubs, receptacles (I have no idea what they're called to be honest) of special dermatological creams. There was a massive vat filled with the shit. I pulled the lever, which was very similar to a Carvel ice cream machine, until the pot was filled. Placed a cover over the cream. Screwed the top on. Placed the sticker carefully across the face of the pot. One down, infinity to go. All this was to save a few pence for my new destination. War-torn Yugoslavia. Or by that point, ex-Yugoslavia.

A friend of Christiane's, I really can't remember his name I'm embarrassed to say, came over the night before I left. He had bags full of toys for me after he learned I was heading to work in refugee camps in Bosnia. I had always sensed a sadness in him since I moved in with Christiane, which didn't total more than three months. I thought it was because he was in love with Christiane. That's what I get for thinking.

We were sipping a few superior German beers when he told me the story. His little brother, who I believe was six, had recently died. How recently, I can't remember. But I know that he was worried about his mom who would not let anyone touch his brothers room or things. When he told his mom about my journey, she sent him over with a bag of her sons dearest toys for Bosnian kids. I hadn't even stuck my thumb out and my heart was already broken.

The tipping point for my decision to go to Bosnia came from an unexpected source as well. When I was living in London earlier I was squatting with folks involved in the anti-war protests. My friend Lee Bryant had also begun to organize 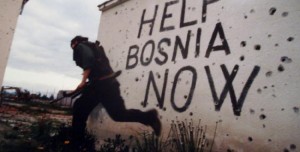 medical convoys for Sarajevo. He was actually at the protests in Sarajevo in front of the parliament when the war broke out. I had somewhat joined their efforts and decided then and there that standing in Trafalgar Square wasn't enough. I needed to go to Bosnia but I didn't know where or when...or how. It was a friend from this 'movement', Feras - an Iraqi Brit, that hooked me up to volunteer. Or so I thought again.

When I left for Germany I had found the Germans somewhat cold, indifferent even. I was soon to be educated on German 'indifference.' Roy Gutman of the NY Post and Ed Vulliamy of the Guardian had broke the story of concentration camps in northwest Bosnia in the summer of 1992. Another wave of reports came again in October. I remember watching the news, constantly looking to Christiane for a quick translation, in horror.

Without much or any time to 'organize,' hundreds of thousands of Germans all over Germany took to the streets with a simple but powerful message: this cannot be allowed to happen again on European soil. Or any soil for that matter. Vigils and protests seemed to be held in every major German city. I was blown away. So much for German 'indifference.'

The next morning I set out, with beautiful toys for the kids, dermatological creams for the mom's, and new found respect for the German people. I was armed to please.

I lucked out and caught a ride with some skiers heading to Schladming, Austria. It was a great ride. The Austrian Alps were, well are, amazing. But I was a man on a mission. I couldn't sit still in this beautiful ski town. Hitchhiking further south wasn't working out so I took a train to Ljubljana where I was greeted by the infamous Slovenian military police. I still today hold a grudge against Slovenes because of them. Luckily it was still a time when American passports were somewhat of an asset and not a trip-switch for harassment. I was officially in a war zone. The cops all donned heavy assault weapons (my favorite as you know). They were rude and grumpy. They disappeared with my passport for about an hour which, I must admit, made me pretty nervous at the time. OK, I was scared shitless.

I took another train to Zagreb. More heavily armed Slavs. The taxi driver was the first of many to rip me off of my whopping 300 Deutsche Marks in savings.

I finally made it to the Peace Hostel. By now Christmas had come and gone. I guess I spent most of it in a car to Austria and Boxing Day on a train to Croatia. I arrived at the Peace Hostel which was the headquarters for Suncokret (Sunflower), a marvelous organization that did social work in refugee camps with women and children. They greeted me warmly. I enthusiastically introduced myself. They sadly informed me that they have never heard of me and were not expecting me. My heart dropped to the floor.