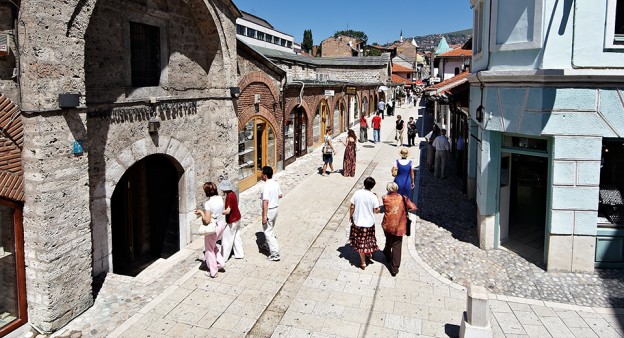 I have compensated for my inadequacies as an artist (or the fact that I am not one) by helping others. Sarajevo has a population of around 400,000 people, smaller than San Francisco. However, it is a factory of talent. The music, film, theatre, and art scene never ceases to amaze me. Perhaps it has something to do with the collective memory of its sometimes painful and trying past, I don't know. Sarajevo was always sort of the Yugoslav capital for music and film. But the cultural renaissance born in the latter years of the war that lasted from 1992-1995 has resulted in yet another boom, with its artist becoming world renowned in all genres. Danis Tanovic won the Oscar in 2003. Jasmila Zbanic won the Golden Bear at the Berlin Film Festival in 2007. Dubioza Kolektiv won the MTV best band awards in 2011. Aida Begic's two films both found their way to Cannes and awards there. Ademir Kenovic, Pjer Zalica's Gore Vatra, Srdan Vuletic's Ljeto u zlatnoj dolini, are all internationally recognized film makers. Haris Pasovic's East West Center has performed at the world's most prestigious theatre festivals like Edinburgh and Singapore. The list really goes on. And even those who haven't achieved world acclaim can, at the very least, boast that their work and creativity make Sarajevo a great place to be.

So what is my contribution to all this. Well, a stubborn loyalty to the artists and their work for one. But I have worked with filmmakers Jasmila Zbanic, Namik Kabil, and Aida Begic in translating, editing and interpreting their scenarios. I was an extra in Jasmila's latest film 'Those who can tell no tales.'  I work with UNESCO on helping protect and promote a lot of the countries cultural and natural heritage which are, to me, completely inseparable. I pretty much do what I can...even if it just means sitting with Laka and trying to find a catchy rhyme for his crazy lyrics for his Eurosong performance. I'll post a few clips of my favorites later.