I've just realized that this period is exactly 20 years since my Balkan journey began. I guess it's no coincidence that I've started here then, huh?

So I'm standing in the office of the Peace Hostel in Zagreb, heart on the floor, remember? You'll have to forgive my memory, some things are very gray or simply not there at all. I try to fill in the blanks with a phone call or email to an old friend. I have no one to call on this one. So I'll just wing it.

In a nutshell, they had no clue who I was. My 'contact' Feras had never contacted them about me as he had promised. I just walked into a country at war with no one expecting me, no one knowing who I was, and apparently with nothing at all to do. In retrospect it sounds scary. At that moment, after picking my heart up off the floor, things were really ok, though.

It didn't take long to figure things out. Suncokret until then had only worked in refugee camps in Croatia - where the war had started a year earlier. They had no activities in Bosnia and Herzegovina where a vast majority of the refugee's (or IDP's as they're called - Internally Displaced Persons) were. The average mission time for a volunteer was around three weeks. Being that they were heading to Bosnia, to a camp that was apparently not in the best of shape, they were looking for people to make a bit longer commitment. Logically, they sought some continuity in establishing their activities and providing the inhabitants of the camp with a bit of stability. A volunteer from Spain had been a no-show, so they made me an offer. We can place you in a camp, they said. But we'd like a two-month commitment from you. So that's how it all started. Three weeks to two months to two decades. So it goes.

I agreed. Had a nice sleep on a comfy bunk bed at the Peace Hostel. The next day we were to set off for Posusje, a small town in the highlands of northwestern Herzegovina. That's all I knew. When tomorrow came we set off on what was supposed to be an awfully long bus ride to Dalmatia. About an hour or so out of Zagreb we came to the town of Karlovac. After passing a few military police checkpoints we were stopped. I could here faint thuds in the distance. The sparkle of what I thought was a fire or two flickered in the same direction. A few thuds came a bit closer. They told us it was too dangerous to continue and that we had to turn around. We were told this was the only route through, so we turned back to Zagreb for plan B - whatever that was.

Plan B would have been great had it been July. But it was late December and plan B was a long bus ride to Rijeka to take a ferry to Dalmatia. It was a rocky ride, with the infamous 'bura' (winds that cut to the bone and literally pick up swirls of sea water and send them sprinting across the surface of the sea, smashing them into the nearest set of rocks) kicking the entire way. Luckily the Florida boy in me kept me from turning green. I can tell you that a few of my fellow volunteers weren't so lucky.

We arrived in Split the next morning. One would think the beautiful stone architecture and Roman-era square would occupy the imagination. But we were greeted by more military police and what, at least for me, seemed like a flurry of military activity. We were certainly closer to the front lines than the 'normality' of Zagreb. The energy was very different. The bus station was literally a 30 second walk from the port. Within a few hours we were in the hinterlands of the Dalmatian coast, somewhere between the Adriatic Sea and Herzegovina. It was a sunny day. I had never seen anything like it. There was no war damage to speak of but we had entered old Europe, or at least how I would picture Old Europe to look like. The roads narrowed. The homes became more rustic and more modest. The obvious wealth of Split had disappeared as we crossed one mountain after another. Traffic mainly consisted of old Yugo's, a fico or two, and lots of military vehicles. The bus barely made it up and over 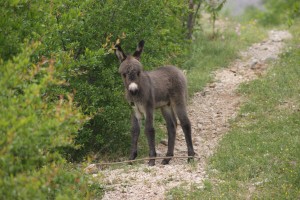 each hill. It spewed black smoke. The donkeys hauling hay seemed to move just as swiftly as bus struggling over the rocky, moonscape of Dalmatia's hinterland.

One might imagine that all sorts of thoughts would be racing through our heads. As for my head, it was fairly still. I was thoroughly enjoying the scenery. I had no earthly idea what a war zone or refugee camp looked like, so, logically, no worries there, right? The only thing I knew about Yugoslavia was the capital was Belgrade, that Dubrovnik was a UNESCO World Heritage Site, and as a fourteen year old I was mesmerized by the Sarajevo Winter Olympics. Those few facts, and that Tito seemed to be a pretty cool cat, was the extent of my knowledge. I was perfectly happy to be an ignorant, happy-go-lucky hippy at least for a few more days.

I think by this point it was already the 29th of December. The crossing into Bosnia and Herzegovina was uneventful. One military checkpoint looked like the other. The flags looked pretty much the same to me too. I couldn't tell you where we crossed that day. I think it may have been the Grude crossing near the Croatian town of Imotski. But that assumption is by pure deduction, not recollection.

I would soon learn that our final destination for the day was not Posusje but rather a small village called Medugorje. As a 'Catholic' that was supposed to mean something to me. But it rang no bells. I wasn't much the Catholic anymore if I could even call myself one at all at the time. Medugorje is a small town in the highlands of the Neretva Valley in western Herzegovina. In 1981 a group of teenagers had a vision of the Virgin Mary in the hillsides while they were playing. The apparitions continued. Word spread. Medugorje today is one of the world's largest Catholic pilgrimage sites, second only to Lourdes I believe. We pulled up to a campsite with bungalows. This would be where we would lay our weary heads for a few days before heading to Posusje. I can't recall why we stopped there and didn't go directly to Posusje. There was no fighting in the area. Perhaps it was orientation...but in all honesty I can't remember a thing.

What I do remember was this. It was getting late so they informed us we would visit the camp in the morning. It was cold. Very cold. We had a few drinks. When we laid down to sleep, lined like sardines on thin military mattresses on the floor, I think it was hard for any of us to doze off. As everyone managed to nod off one by one, I was still wide awake. Not out of the anticipation for the next day but because I had my Florida sleeping bag. It was minus whatever. It was friggin' freezing. I shook for what seemed to be hours. A German girl, Katherine, was woken by my delirious mumbling. She looked at me, I guess I looked blue. In an exceptionally thick German accent she asked "Are you cold?" I didn't need to answer. "Why didn't you tell me!?" She opened up her Artic sleeping bag like a massive mother hen wing. She was a red-headed farm girl. Strong and obviously much more adept than I to the cold. She draped the side of her sleeping bag over me, drew me into her warm body, and gently scolded me "You should have said something, silly!" We did the fully-clothed/fully-platonic spoon all night. It was the best few hours of sleep I think I ever had. Saved by a German, again.

The New Year of 1993 would start here. The next day would change my life forever. I was 22.

So that is how it all started a long two decades ago. I think I'll jump around from here on out. Chronology bores me. So it goes. peace