I guess when you live somewhere long enough...you record a few sad moments here and there. Bosnia and Herzegovina has given me a lot of joy in the past quarter-century. It has also made me thought I was losing my mind at times. And it certainly knows how to press my rage button on occasion. Tonight was a strange night, though. A strangely sad one.

Last night my electricity went pop...and out...just before midnight. So I just went to sleep and figured I'd sort it out today. I was at work most of the day and didn't get home till late. I called elektroprivreda and after listening to their instructions and attempting to jump start my electrics back into play...I failed. So they immediately sent a crew out to fix it. I think it took them 15 minutes to get here. Yes, I'm talking about a state-owned Bosnian company. 15 minutes flat. I swear! They inspected the main meter and found nothing wrong. That was all that was within their jurisdiction to fix. The box owned by the electric company was in working order so I'd have to look elsewhere for professional help to solve my wiring issues.

We got to chatting. They didn't understand what I was doing here. This, I must admit, happens to me quite regularly...and particularly lately. "Why are you here?!" My answer these days has been "I know, I know...I ask myself that all the time." They were very professional and polite. But one was driven to get the bottom of the confusing puzzle of why on earth would an American (with children) choose to live here. It wasn't the typical Bosnia-bashing moment where everyone was cynical, skeptical and just downright negative. It was a mindful and gentle interrogation. He pressed on with his questioning. "You know there is no future for us here, right?" I admitted it wasn't looking bright but tried to point out that fucking infamous phrase I love to throw out - the one with the P-word. Potential. Yes, I said it again. 'We have a lot of potential here, though' before countering my sentiment with a pathetic attempt at humor by saying 'samo nema pamet.' I got a short-lived chuckle from the kind electrician. My one-liner didn't go over well. 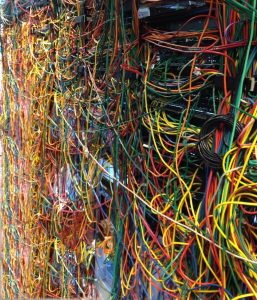 He ran off some statistics on depopulation. He said the word 'prospect(s)' about a half dozen times, all with the prefix 'no'. But again, he wasn't being a stereotypical whining 'everything sucks' Bosnian majstor. The other electrician chimed in with some fatherly concern of his own for me. "So you have kids?" 'I do, two sons' I told them enthusiastically. He looked at me with even greater worry and turned towards the fuse box to fix it. (Oh yeah, I forgot to add they came in the house and fixed the shorted out fuse.) He turned and pointed to the horribly discombobulated fuse box in the house and asked me 'you think you could find something like this in America?' I looked at the box. It's true, the wires were a horrible mess. They looked like a genuine safety hazard. I just shook my head no, almost ashamed that he was right. But that's no reason to leave Bosnia, right? Plenty of places have bad wiring, no?!

As they packed up their bag I gave them one of my Don't Miss travel magazines. I told them to have a look, to see how beautiful their country was. Usually, I would say 'our country' but I didn't tonight for some reason. He put the cover over the electric box and sealed it. Put his bag down and looked at me with the saddest eyes of the evening yet..."We're too old to leave...no one will take us. But you have kids. For their sake, protect them from this place. Move them away from here." He used those words. He told me to protect my children from Bosnia. The only place they've ever known. The place they were both born and raised in.

Protect them he said. Protect them. Almost like Bosnia was a wild animal or a drunk driver or an avalanche. Something that you consciously need to be aware of and take measures to ensure you stay away from. They both had this very soft, fatherly tone to their voice. They both looked at me, several times, with these concerned-like short stares before heading out. As they walked down the stairs one stopped and turned towards me. "Sine, ide odavde dok mozes.Ovdje nema buducnost." He sounded as if he was pleading with me to go. Actually, he was pleading with me.

I don't think I've had a sadder encounter with an electrician or heard a more subtle, gut-wrenching rebuttal of life in Bosnia than I did tonight.