I don't think I've made a conscious decision to regurgitate specific events or memories from my past. If I have, I'm certainly not aware of it...yet. But Josip's face keeps coming back to me. Let me tell you why. It might be a long one.

We got stuck in a five or six day offensive. We were supposed to go in and out that day, just like we had done on earlier trips when we evacuated members of Mostar's Jewish community and the Greljo family, who had two seriously wounded children, to Split. Lejla was only 19 days old and was wounded in the leg. Elmir, her older brother, had lost an eye and had hundreds of shrapnel wounds to his face and body. The tank round that ripped through their flat killed their older brother Dado. He was 5. But this trip was different.

Every one of those six days the bombs fell like rain. We were in the hospital so one would think that at least that building would be spared. We were wrong. The wounded came in a fairly constant flow. So did the dead. I had eaten one night with a member of the Albanian community who was asking us to take him out. His body was amongst the dead the next morning. A Yugo pulled up, trunk open, carrying what must have been 5-6 bodies. Prisoners of war had been used to dig trenches on the front line and to do other dangerous work. They were not exempt from the brutality either. That's when Josip came in.

Again, the details are very foggy. There was a lot of commotion around Josip. I didn't understand the implications at the time. Probably didn't care much either. He was an officer from the HV - which was the Croatia proper army. In short, proof that Croatia was fighting in neighboring Bosnia and Herzegovina. There were so many wounded that he was placed in the hall on a stretcher to wait for surgery. I don't have much of a grasp on the timeline, lulls in shelling are numbing as ones mind reels from the intensity of being under heavy artillery fire. But it looked a bit like this.

Operation theatres were full. Every doctor and nurse and free hand was here or there tending to the wounded. Josip and I found ourselves in the dark hallway, alone. It might have been 5 minutes it might have been 15, I really don't know. He had a deep shrapnel wound to the abdomen. He was white as a ghost. I was fairly convinced he would momentarily become one. He had obviously lost a tremendous amount of blood. His stomach bulged, almost looking like a volcano. The hole at the top could easily have fit my fist. No blood ran from it. His head was turned to the side, towards me, as he slightly convulsed, vomiting a bit. We locked eyes.

It wasn't freaky. I wasn't scared. The only thing I was thinking was that I am going to be the last person he is going to see. I didn't speak. We just stared. He was surely looking at death. I was looking at him. At the risk of sounding pathetic, I really just wanted to send him some love. And that's what I did. And as I sat and he laid there, we stared at each other. The connection was made. His eyes sometimes registered that he was sharing his space and time with another human. Other times he was obviously looking straight through me. I always wondered what he saw.

Then another wave of madness interupted our moment. They swept in and rushed him to the operating table. The ensuing chaos absorbed me. I didn't know what card fate would deal him. In fact, I didn't even know his name at the time. I would find that out later.

On the sixth day we decided to leave during a lull in the shelling. We didn't drive out like we had come in. Our ambulance was peppered with shrapnel and all four tires were relieved of their air. We left in UN armored personnel carriers. Mostar was patrolled by the Spanish Battalion (SPANBAT). Although I love Spain and the Spanish...I can't say as much for their performance during the war. The only help they really provided us in Mostar was to unknowingly tip us off of an oncoming offensive by getting in their APC's and getting the fuck out of dodge. When they left we knew the proverbial shit was about to hit the proverbial fan. They were mainly conscripts, unlike the Brits or the French, and it showed. 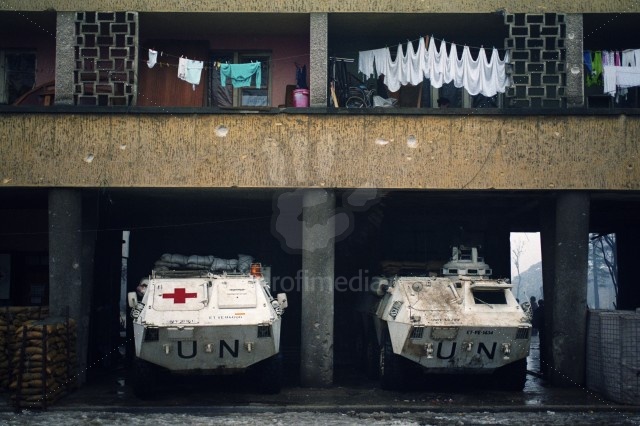 I had to run through a barrage of sniper fire to get to where they parked their APC's. When I arrived to the APC they wouldn't open the hatch. Where they were parked, or perhaps better put hidden, was completely safe. But it took about 15 minutes of me knocking (knocking on an APC hurts, by the way) and holding my United Nations High Commissioner for Refugees (UNHCR) card up to the very small armored 'window.' All of a sudden a blue helmet appeared. He was young. Probably even younger than me. He held his hand up as if to motion 'stop!' The only English he could  mutter was this: "Moment." Then he showed me his finger, turned it as if to dial a phone from the 1970's and spoke again: "Madrid."

My deductive reasoning led me to believe that to take a foreign UNHCR card holder a few kilometers down the road to safety they had to call Madrid for approval. They were probably just calling the boss in Medugorje or something but still, the weak UN mandate in the former Yugoslavia made at least two things clear: to secure humanitarian routes to allow aid convoys to reach the needy and 2. to protect and assist international aid workers/agencies, especially those affiliated to the UN. Now I wasn't working for a UN agency but was an 'implementing agent' as they called it. Which meant I at least got this little blue card that, hypothetically, might save my ass in a tough spot. Wishful thinking.

The call, whether to Madrid or Timbuktu, finally came through and I got my first ever ride in an APC. Bumpy. Uncomfortable. Hot. But the lads in blue helmets were nice, like they always were. It was the UN that failed miserably at their mandate, not these kids. So it goes.

When we came back to east Mostar again, which wouldn't be for several weeks, maybe more, I asked about the wounded HV officer. The room went silent. The doctors and nurses looked at each other. They whispered amongst themselves. An English speaking nurse approached and angrily inquired as to why I was so interested in him. I started to explain. I was cut off. They were now suspicious of me. I honestly didn't know if he had survived. The answer shocked me.

He was stolen, I was told. I didn't understand. Apparently the Spanish Battalion had come looking for him in the hospital by a 'request' from the other side to evacuate him. After some arguing and threatening, SPANBAT loaded him up in an APC and ferried him to the other side without permission. It had turned out to be a bit of a scandal. Lots of spy talk ensued about me after that but I just wanted to know if this no- named guy was alive or not. He was. His name was Josip Kordic. I never saw or heard of him again. Some people from Mostar are convinced even today I was/am a spy. Oh well.