The Serbian filmmaker Emir Kusturica plans to make a film about Serbs from Kosovo being murdered in order to sell their organs during the war in 1999. A motivating factor, he claims, is to undue the negative image of the Serbs. When I want to shed positive light on something, I definitely don't need to belittle others or to paint a collage of collective victimhood to do it. Apparently he does. Affirmation of one's own culture through the degradation of another's, however, is a favorite Balkan pastime. I find it rather pathetic. In the end, it simply won't fly. Let me tell you why.

I worked in Albania and Kosova just before, during and after the NATO campaign in 1999. I was with the Save the Children Alliance that was first based out of Tirana and then later in Prishtine. It was a crazy time. Although I was field officer for the entire country, I spent most of the bombing campaign on the Albania - Kosova border in the northeast town of Kukes. It was a shitty little town of maybe 15,000 people that was inundated with a quarter of a million Kosovar refugees. A total of 500,000 Kosovars were expelled across the border at Morine by Serbian forces. I was there to witness a large part of this exodus. As Kurt Vonnegut would say, welcome to the monkey house. 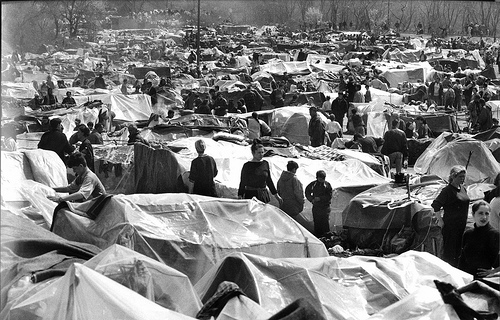 There were people everywhere. And I must admit I wasn't impressed with local Albanian hospitality towards the Kosovars. The foreign journalists and aid workers didn't help much either by snatching up accommodation for themselves - which drove the prices sky high and out of reach for most refugees. That forced most Kosovars to sleep in tractor trailers or in tents. I pitched a tent near the lake in the midst of around 20,000 refugees.

Camps were soon established by CARE, the Turkish government, and even the United Arab Emirates military. They ran a tight show. It was the best run camp I had ever been in....and I've seen many, at least in the Balkans. It was a monumental task to get this all organized. I guess the military discipline of the UAE camp came in handy. They didn't take any shit...as the Albanian mafia would soon find out.

There were always rumors floating around about the kidnapping of children and girls. Some to steal their organs, others for prostitution in Italy. You could literally see the fear of god in the eyes of both the Kosovars and locals when a car pulled up with a Vlorë registration tag. Vlorë was, and some purport still is, the mafia capital of Albania. I know we were not allowed to travel there. The Vlorians were kind enough to make the effort to visit us, though.

There were a few reports of missing children in the camps. But those are very difficult to confirm in the chaos of massive refugee movement. I did, however, witness several things. One of our staff members, a young Kosovar lady, was approached by a van with Vlorë plates. The door swung open and two men grabbed her. What they didn't know is how strong this little woman was. She got away. It confirmed, up close and personal, our concerns about the kidnappings. We were all on red alert. And in the days to come we learned of more similar incidents. Several days after that two men were shot dead by UAE soldiers. Access to the camp was very limited and, like I mentioned earlier, they were not fucking around. One man was caught attacking a woman whilst the other tried to flee back over the fence. Neither of them made it. They were apparently both from Vlorë.

The stories of murdering Serbs in Kosovo during the conflict for their organs may very well be true. The numbers are most likely quite small. Only one, of course, is one too many in my book. I personally experienced retaliatory tactics by Albanians against Serbs in Kosovo. That's what war is. It's plain ugly. I was, for that matter, forced to leave Kosova for defending an old Serbian lady. So it goes.

But what I do know is that the Kosovars themselves were victims to that same brutality. That I witnessed first-hand. The underground of the organ smuggling world is indeed an nasty one - but it is one that knows no borders or nations. It is something that I have never spoken of, perhaps because it is so hard to fathom that it could actually be true or because it's so hard to get the bottom of things of this nature. The mafia thrives on conflicts and disarray. The chaos of the situation allowed them to step in and wreak their havoc almost unchecked.

My point is, these horrible things did happen.They undoubtedly happened to the Kosovar Albanians at the hands of the Albanian mafia. And a lot more atrocious things at the hands of Serbian paramilitaries. Is it feasible that the same thing was done to Kosovo Serbs? Absolutely. In fact, I'd bet on it. If Emir Kusturica is looking to affirm the Serbs as a nation and a people, though, I can think of a million better ways to do it. Playing the victim card simply ne pije vode. What happened in Kosovo was the Kosovar Albanians taking a large, large brunt of the brutality (after decades of state-sponsored oppression) - mostly at the hands of Serbian paramilitaries and, in a completely different context and to a much lesser extent, by the Albanian mafia. What happened later is another story altogether.

Organ trading is the business of the devil. If Kusturica is trying to glorify the Serbs and defame the Kosovars via a one-sided organ theft story, I'm afraid he's going about it in all the wrong ways. Perhaps Kusturica rightly criticizes the quality and accuracy of Hollywood when it comes to the Bosnian war (although he wouldn't know because he wasn't here). But, knowing him, he will most likely follow in their footsteps with a biased and sensationalized tale of the victimization of 'his' people in Kosovo. Two wrongs never make a right, Emir.

You openly attack the credibility of Hollywood films about the region and the unfair demonization of the Serbs. It seems your objective is to do exactly the same. It would be immoral and factually incorrect to portray the Kosovar Albanians as evil organ smugglers terrorizing innocent Serb civilians. That innocence was taken from us all quite some time ago. Mainly by the people you liked to rub elbows and drink rakija with in Beograd.