M is for moody, melancholy and me.

I'm a bit grumpy today. I'm working on a project that seems to be more like damage control than producing something of use to anyone. That discourages me. Then procrastination sets in. I'm a pitiful procrastinator if I'm not excited about what I'm doing. I have mastered the art. So it goes.

My son Noah had a terrible two (approaching three) fit this morning. He didn't want to go to school. I had to have him out of the house (so I could procrastinate in peace). He is one strong little bugger. I broke out in a sweat trying to get him in the car seat. Mind you, there is a foot of snow on the ground and its below zero. But I was definitely sweating. And swearing.

We didn't talk the whole way to school. We always do. Then, for the first time, he cried when I dropped him off. He wouldn't let go of me. That made me feel even worse. The teacher took him. I left. Then I came back to peek. He was still crying. I feel like a shit for yelling at him. I know it's part of the game but I hate losing my shit with the boy.

So my punishment, self-inflicted of course, is sitting here trying oh so hard to get this bloody report done. It's not going. And yet I'm so close to the finish line. I'd rather go back to his school and see how he's doing. I know he's just fine. But couple first-time parenting with eighteen years of Catholicism and what you get is one big, heavy and fucking annoying guilt trip. It's like I firebombed Dresden...when all I did was yell at my kid. I really do think too much at times. 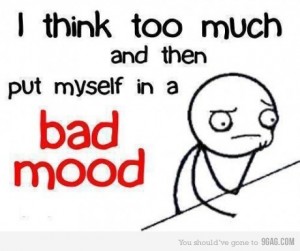 So there's this project. The snow. My silly tiff with my son. I've been sick since we got back. We're fairly broke at the moment. No, we're totally broke. But all those things are really no big deal. The project will get done. The snow will melt. My son has probably already forgiven me...even though I'm not sure when I'll forgive myself. My cough is ceding. We'll be paid soon enough, let's hope.

I have a tendency to call this the Bosnia Blues. And although I could easily make long lists of things that bother me here it really has nothing to do with Bosnia at all. Or Herzegovina for that matter.The melancholy is me. It can be triggered by the most trite of things. Yet when it comes it grabs me by the balls and doesn't let go...well, until it does. I hate being moody.

I may be singing from the mountaintops tomorrow but today I'd rather disappear or stick my head in the sand (or perhaps snow would be more appropriate today). What's Dresden like this time of year?