It was the summer of 1999 (now I have Bryan Adams 'Summer of '69 song in my head). I had been shuttling around Albania between refugee camps. By far the worst situation was in the border town of Kukes. So most of my energy was utilized there. Refugee camps were well established. Then we started getting famous visitors for the fundraising craze. We lucked out, Save the Children brought Maria Bello. We met in Tirana. She was not only cool as a cucumber but well-informed with both feet on the ground. It was enjoyable hanging out with her and she seemed genuinely interested in the plight of the people.

Unicef brought Bianca Jagger to a refugee camp in Kukes to address a group preschool children. Although UNICEF drove me crazy with their bureaucracy and flag waving, we were doing good things together in Kukes. Then Bianca showed up. 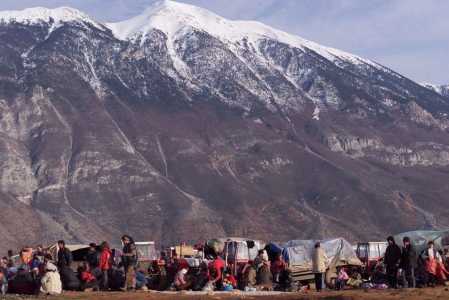 So picture this. We're sitting on the floor on a hot summer day. There are 240,000 refugees squeezed into an exceptionally poor town of 20,000. There was always the slight (or not so slight) hint of sewage. It was dusty and dry. The mountain winds constantly made the tent doors and shutters flap. We gathered the children from their improv classrooms to sit in the field to listen to the one and only Bianca Jagger. Cameras rolling. The world's press at her feet, just as she likes it.

By that point I was sick to my stomach and it wasn't from the fresh smell of human shit.

UNICEF had been dragging their feet with our goal of get every kid in school as soon as possible. We had the money and the resources. Save the Children sourced everything locally. We were on the move. It was quite a rush actually. It was the first time in modern humanitarian aid that this type of frontline intervention was used. We literally took kids off the exodus queues and put them in school. It was working. UNICEF had to place orders to their main warehouse in Denmark for school supplies. Those packages would arrive very close to the date that all the refugees packed up and went back home to Kosovo. So much for emergency aid. But back to Bianca.

So she stood there in her blue jacket and white hat. Armored UNICEF vehicles were in the background with big blue flags blowing in the wind. Bianca talked a little more about herself. Then a bit more about herself. A word or two about UNICEF. As I watched these kids, their heads sort of cocked to the side like golden retriever puppies confused about was being said. Even the translator seemed uncomfortable. But she got her 10 minutes of fame that she obviously thirsted for.

The big blue flag entourage took off into the horizon, leaving a long trail of dust behind them. We never saw or heard from her again. Always count your blessings in war.

I admit I have memory troubles, particularly with dates. Bianca's speech to small children was so political and heartless that it is carved in my memory. The date is not. I think this is what happened next. Most of the kids went back to their tent classrooms. In order to have as big of a group as possible, children from the neighboring camp from across the street were 'invited.' It was a dangerous street. The local Albanians were hired to drive aid from the main warehouses to the various refugee camps. They were slow and lazy so the aid agencies decided on a policy change. The drivers would be paid per delivery.

They all instantaneously reincarnated into Mario Andretti. These old and decrepit Chinese trucks would rumble down the narrow, pot-hole ridden roads at frightening speeds. One of the kids who had the pleasure of listening to Bianca headed back towards his camp. He didn't look both ways (most people in the Balkans never do). The overloaded truck's wheels screeched to a halt. The boy was struck by the tire, his head wedged between the tire and the asphalt. He died instantly.

I had become used to gore from Bosnia. Whenever it's a kid, though, it tends to do your head in, no pun intended. It was a gory sight. His brains literally poured out onto the pavement. His uncle had been close. Dad showed up within minutes. They covered him with a blanket before mom arrived. When mom came things fell apart. That painful yell is etched. His legs veered from beneath the blanket and, like every mom, she recognized him from his shoes, his socks, and the little fuzzy peach hairs on his legs. Every mom knows their babies. This one had just been taken from her.

There wasn't much any of us could do. We wanted to get the other kids away as quick as possible. Within minutes I had left. For the life of me I can't remember what I did or where I went after that. It is a complete blank. So it goes.