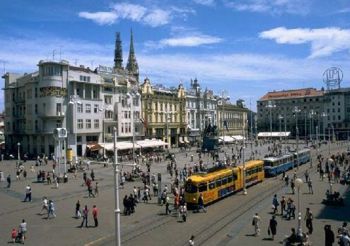 I have never - ever - had an uneventful road trip in the Balkans. Barring all barnoneables,

We had just crossed the Sava River, the same natural border that creates the political one between Bosnia and Croatia. After the curvy two lane roads of Posavina it was nice to be on the highway. My old Forester hadn't ventured over 130km an hour in a very long time. It didn't take long for the eventfulness to begin. We were going through one of the many beautiful Slavonian forests, with the road lined with big, beautiful hawks perched on posts when we saw the road maintenance crews crossing from the other side to greet a policeman. It turns out the policeman was a policewoman. She was standing next to the fence that divided the highway from the forest. We slowed down to gawk.

The road crews were cutting a whole in the fence. On the other side, next to a drainage ditch, was the dead body of a man. He looked dark purple. He must have been out there all night. I even noticed that he was slightly bald on top and had hair on the side of his head. He wasn't tall, maybe 5'8''. We must have been traveling at close to 80km an hour and the fence was an easy 30 meters from the shoulder of the road. How and why does the human brain record this stuff in what couldn't have been more than literally three seconds?!

I can't remember what I did five minutes ago. I can drive for hours on end and at the end of my journey not remember a second of that drive. I think I'd forget my head if it wasn't attached to my shoulders. I honestly think I could draw this guy with the help of a forensic artist.

I hadn't seen a dead person (except for open casket funerals of old people) since the war(s). I saw a lot of them then. The rest of the ride to Zagreb I thought about what that guys film must have looked like. Was he killed and dumped? Did he get drunk, stumble around the forest, and pass out never to wake again? I found myself scanning the side of the road for more bodies. Of course there were none. I knew there wouldn't be. But my eyes still obeyed my brains command to scan.

Then Zagreb. Ah. What a lovely town. It's so clean. The winter air quality is eons ahead of Sarajevo, where we still use piss-poor quality coal for heating our homes and polluting our air. God forbid we should use bio mass being that Bosnia and Herzegovina has an estimated 40% of forest cover.  I struggled with the order of the place. I had to use every atom of strength to not cross the pedestrian crossing whilst it was red. Everyone stood there, peacefully and patiently. The anarchic Bosnian in me, with its claws dug deep into my rebel soul, wanted to dart across the street....barely missing the cars that dared to be in my way. Cars stopped at crossings with no stop lights. I didn't trust them. I had to wait (and stare in temporary amazement) to make sure that they had actually stopped for moi.

I stumbled upon a non-smoking cafe. And then another. I could have drank baileys and coffee all day just because no one was chain smoking around me. I went to meetings not smelling like an ashtray. Then I started feeling guilty for liking Zagreb. I felt guilty for comparing everything that was 'better' than in Sarajevo. I felt guilty for feeling good here. I obviously have not been able to shake the Catholic guilt trips of my childhood. It made me realize that Sarajevo, or Bosnia and Herzegovina for that matter, isn't just the place I live. It's like a member of my family. It's my son's brother and sister. It deserves my loyalty. Was I betraying it?

So I ask myself...why am I already looking forward to my next trip out of Bosnia when I am still sitting in my hotel room in Zagreb. I fear something is astir.