Tone from the top 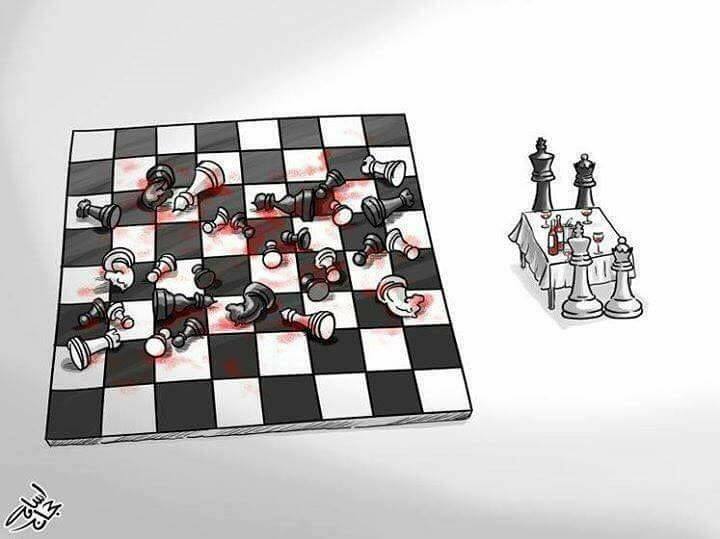 I wonder where our leaders have gone. I'm not talking about the ranks of a Mandela or a Gandhi...I'd just settle for an intelligent, level-headed individual who is aware of two things:

I know we're knee-deep in the information age so we have access to more things going on around the globe than ever before. And yes, I follow world affairs way too much. But some have the illusion, though, that we are living in one of the most prosperous and peaceful periods in human history. I'd love to pop one of those happy pills if they have any spares.

I know the World Bank will tell us that poverty worldwide is in decline too. And for any of you that know me...I am, usually, the optimistic type. But the heavy doses of real politik is a real ass-kicker these days and the only voice of reason from western quarters that I'm hearing right now is from a German physicist named Angela.

Although I'll never sing the man's praises, Vlado is, in his usual fashion - calm, cool and collected. I'm sure the Syrians at the receiving end of MiG jet bombings would beg to differ. And sure, they messed with US elections. Why? Because they could. Besides, we do it on a regular basis anywhere we bloody want to. Including Russia. I think we need to get over the 'shock' that elections can be rigged or meddled with. Shit, they're rigged all the time - ever heard of gerrymandering?

The Iranians have now tested their Khoramshahr ballistic missile. I'm sure this has something to do with a bit of taunting from Old Orange. The Iranian deal isn't the disaster O2 and Bibi would like us to think. And it brought us to the table with the Iranians for the first time since the Carter administration. Call me crazy but I've liked every Iranian I've ever met. Granted, I've never had tea with the Khomeini but it couldn't be much worse than having a beer with the trumpet, could it?

Although some will adamantly deny this, the geo-political construct of the Middle East, held loosely together by post-colonial artificial nation-state borders is seemingly disintegrating before our very eyes. The Shi'ite - Sunni divide (to horribly oversimplify) appears to be redrawing a Shia dominated northern Middle East to the Mediterranean and a Sunni dominated southern Middle East. We now see Syria, Iraq, and Iran and their Hezbollah brothers in arms in Lebanon facing off with Turkey, Saudi Arabia, Jordan, and the Emirates - all at the expense of the people of Syria and Yemen. I won't even mention the unfolding Sunni divide between Qatar and the Saudi's. Gotta love the Saudi regime, though - BFF!  Perhaps we could just bring in the Kurds to mediate all this bickering, huh? OK, bad joke.

And oh, did anyone notice, by the way, that the West has decided to let Assad (and the Russians and the Iranians and Hezbollah) be the victor(s) in Syria? So much for the revolution, huh? Just ask Orouba and Halla Barakat. They're all terrorists anyway, right?

Our buddy Kim on the other side of the pond is playing with the idea of testing a hydrogen bomb. How fun! Old Orange and Fucknut Kimmy are exchanging personal jabs like two special needs teenagers while the Koreans south of the border hope and pray that these two munters don't light the fire that could literally roast Seoul. Kimmy truly is a bellend but most yanks don't realize or remember that the US brutally killed at least 2 million North Koreans in the 50's. They certainly haven't forgotten that. The rate of civilian casualties in the Korean War was higher than both WWII and Vietnam. I mean we're still mad at the Japs for Pearl Harbor for Christ's sake. I'd say that Kimmy is the result of a half century of collective PTSD. But who am I to judge?! Again, I'm no fan of fuckwit or fucknut or whatever you'd like to call him, so please don't send me messages accusing me of being one. (If you're wondering where I learned my French, that would be from the Norfolk boyz).

The Rohingya Muslims from Myanmar are being flushed out of Rakhine at an equivalent pace to the cleansing of Kosovar Albanians in 1999. Irma and Maria have quite possibly just created the first generation of climate change refugees in the Caribbean (I know, I know...it's just a Chinese scam, silly me). The Iraqi Kurds are heading towards an independence referendum...which will certainly lead to further destabilization and fuel the fire of independence for Kurds in Syria, Turkey and Iran. The Kurds have historically gotten the short end of the stick so my guess is they won't back down on this one, not even with Agent Orange pressuring them to do so. But the region is already teetering on the edge. Humpty Dumpty will be difficult if not impossible to put back together from this fall. Now to the Catalans. They are heading in a similar direction which could lead to another European shit show with Scotland, Republika Srpska, the Basque country, Vojvodina, Northern Ireland, or Macedonia following suit. Precedent is a bitch. Let's not forget the party brewing in the Baltic's either.

65 million refugees on the run around the world and no one, I mean NO ONE, wants them. Except for, of course, the flourishing slave trade in the Sahara comprised of migrants from Sub-Saharan Africa (does this ring a bell, anyone?). Greece and Italy struggle daily with the silent arrivals of thousands of refugees and migrants. I won't even mention the numbers Turkey, Lebanon and Jordan have to deal with. I'm too tired to even talk about ISIS, Boko Haram or the rise of fascism and the Neo-Nazi's in the West.

If you're not stressed out yet, I think it would depress the hell out of most if I were to list the places that are genuinely (or at least partially) fucked at the moment. But being that I'm on a roll, here's the list if you insist: Ukraine. Yemen. Syria. Iraq. Somalia. Myanmar. DRC. Libya. Gaza. Houston. The Keys. Puerto Rico. Dominica. Barbuda. El Salvador. Charlottesville. Afghanistan. Nigeria. Mali. Burkina Faso. Liberia. South Sudan. Greece. Macedonia. Turkey. Lebanon. Pakistan. Kashmir. Tibet. Sierra Leone. CAR. Chad. Haiti. Mexico. Standing Rock. Feel free to add if I've left anyone or place out.

So what's the point of all this, you ask? Is this a collective call for a cyanide induced mass suicide? Don't be silly. It's a call to point out that the tone from the top really does matter. As does the noise from the bottom. Rhetoric is not just words. It sparks fear, angst, paranoia, and - you guessed it - war. The language we hear from the top at the moment will lead us down only one road...and I'm quite sure it's not one we want to go down. Cool heads count in clutch moments in history. And right now I'm hearing too many shitheads spewing fire and brimstone from the rooftops.

So where are the ones trying to tame the flames? The decisions and mistakes we make now will be the ones our children will inherit. Either that, or we'll just all burn (or drown, depending on geographic location).

If we're not yet aware that we are pawns with serious skin the game...or, worse yet, just not willing to do anything about it...do they get to call checkmate?

To be honest, I'd rather build a tree house for my sons than a bunker. But that's just me.