No beginning and no end

Usually when the father of the bride addresses both families at a wedding he speaks of his love for his daughter, how pleased he is to welcome the grooms side into the family, and (whether he believes it or not) that his son-in-law is a great man that truly loves his baby girl.

At our wedding, exactly a half decade ago to the day, my 6'4" father-in-law stood up, champagne in hand, and gave a speech a little something like this...

"Today is a very important day for me and for all of us. This wedding shows the unbreakable bond between Bosnia and America. America is a great friend of ours and this is one more step in solidifying the good relations between our countries. Good foreign relations between America and Bosnia is key for us, for without America, Bosnia wouldn't be here today...."

He carried on a bit more and I do believe he mentioned his daughter at least once in his state of the union speech. He is the only man (or woman) in my life who has successfully quelled my criticism of American foreign policy. He doesn't want to hear it. And can talk volumes louder than I and is not at all shy about drowning out my misguided dissent with his boisterous voice. Bless him.

Five years ago today we gathered in the Derzelez House in Sarajevo's Old Town. This house is the oldest Ottoman home in Sarajevo, dating back to the 17th century. There was only room for our immediately family and a small handful of close friends. In hindsight, the municipal ceremony must have been somewhat confusing for my family. The official from the municipality who legally married us carried on for some fifteen minutes about the rules and regulations of marriage and the state. A ceremony certainly inherited from Bosnia's socialist past. I could see some of my family members cock their heads in confusion every now and then. Nothing like a cultural exchange during your wedding vows. 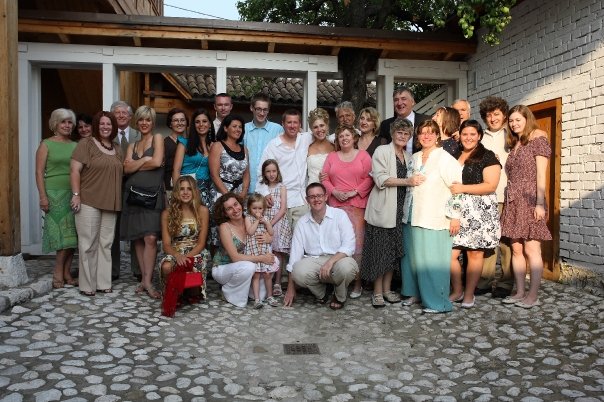 Just after the ceremony we moved to the 'big room.' This is the room where my father-in-law gave his inspiring speech. Then Sabina went to each of her family members and introduced them and what they meant to her to my family in English. I followed by doing the same for my family to Sabina's in Bosnian.  I thought that would be a nice touch being that most weddings, besides having the same soundtrack (Celebrate Good Times, c'mon!), often find the brides family sitting on one side mingling only amongst themselves and the grooms side doing pretty much of the same.

Like Mido said (that's my father-in-law), this was not only a joining of family but of continents and nations, right? So we thought it would be a good way to break the ice and encourage shuttle diplomacy. It worked.

It was a good day. And every day since then has been even better. My 'better half' (whatever) truly does make my life that much better. I am grateful for her friendship. I adore how much she loves our son. It fascinates me watching her grow into her own. It never ceases to amaze me how committed she is to changing me (keep tryin', hon). I love how she thinks she is always right fully knowing that it is me who is always right. I am eternally thankful that we allowed destiny to do its thing! Happy Anniversary Sabina.

(For those of you unfamiliar with our courting process....http://thebosniaguy.net/so-you-dont-believe-in-destiny-you-say/)